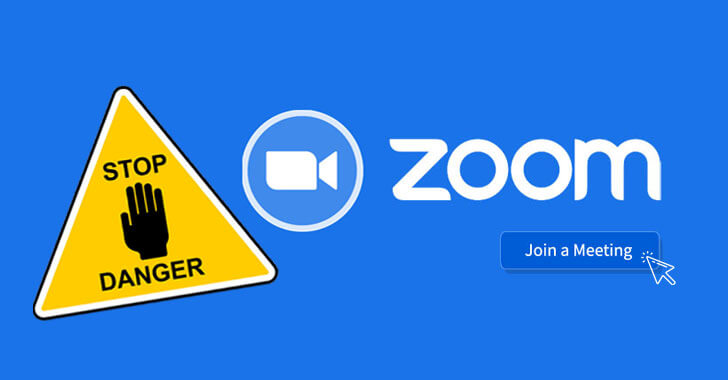 Zoom has been there for nine years, but the immediate requirement of an easy-to-use video conferencing app during the coronavirus pandemic overnight made it one of the most favorite communication tool for millions of people around the globe.

No doubt, Zoom is an efficient online video meeting solution that’s helping people stay socially connected during these unprecedented times, but it’s still not the best choice for everyone—especially those who really care about their privacy and security.

According to cyber-security expert @_g0dmode, the Zoom video conferencing software for Windows is vulnerable to a classic ‘UNC path injection‘ vulnerability that could allow remote attackers to steal victims’ Windows login credentials and even execute arbitrary commands on their systems.

Such attacks are possible because Zoom for Windows supports remote UNC paths that convert potentially insecure URIs into hyperlinks when received via chat messages to a recipient in a personal or group chat.

Confirmed by researcher Matthew Hickey and demonstrated by Mohamed Baset, the first attack scenario involves the SMBRelay technique that exploits the fact that Windows automatically exposes a user’s login username and NTLM password hashes to a remote SMB server when attempting to connect and download a file hosted on it.

To steal Windows login credentials of a targeted user, all an attacker needs to do is sent a crafted URL (i.e., \\x.x.x.x\abc_file) to a victim via a chat interface.

Once clicked, the attack would eventually allow the attacker-controlled SMB share to automatically capture authentication data from Windows, without the knowledge of the targeted user.

To be noted, the captured passwords are not plaintext; instead, NTLM hashes of them, but a weak one can easily be cracked in seconds using password cracking tools like HashCat or John the Ripper.

In a shared environment, like office space, stolen Windows login credentials can be reused immediately to compromise other users or IT resources, and launch further attacks.

Besides stealing Windows credentials, the flaw can also be exploited to launch any program already present on a targeted computer or execute arbitrary commands to compromise it remotely, confirmed by Google security researcher Tavis Ormandy. 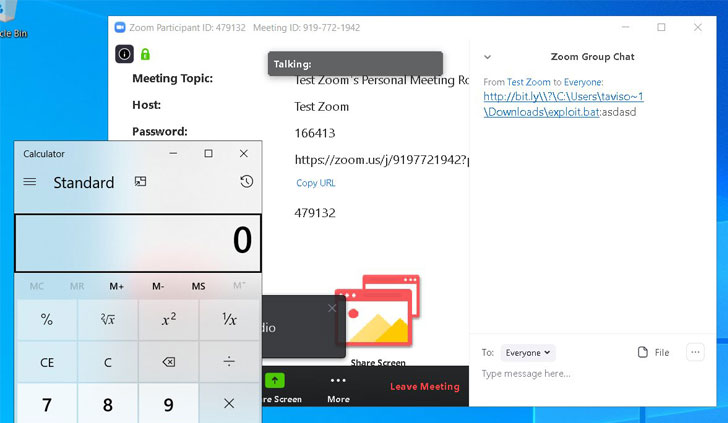 As shown, Ormandy demonstrated how the UNC path injection flaw in Zoom can also be exploited to run a batch script—without a prompt—containing malicious commands when called from the Windows default download directory.

The second attack scenario relies on the fact that browsers running on Windows operating system automatically save downloaded in a default folder, which can be abused to first trick a user into downloading the batch script and then triggering it using the zoom bug.

To be noted, to exploit this issue, an attacker must be aware of the Windows username for the targeted user, which, however, can easily be obtained using the first SMBRelay attack.

In addition, another security researcher going by the name ‘pwnsdx’ on Twitter shared another trick that could let attackers hide malicious links when displayed at the recipients’ end, potentially making it look more convincing and practical.

What Should Zoom Users Do?

Zoom has already been notified of this bug, but since the flaw has not yet been patched, users are advised to either use an alternative video conferencing software or Zoom in their web browsers instead of installing a dedicated client app on their systems.

(Update: A day after this report was published, Zoom apologies for falling short of privacy and security expectations and released an updated version if it software to patch recently reported multiple security issues, including UNC path injection.)

Some of the best alternative video conferencing and chat software are: 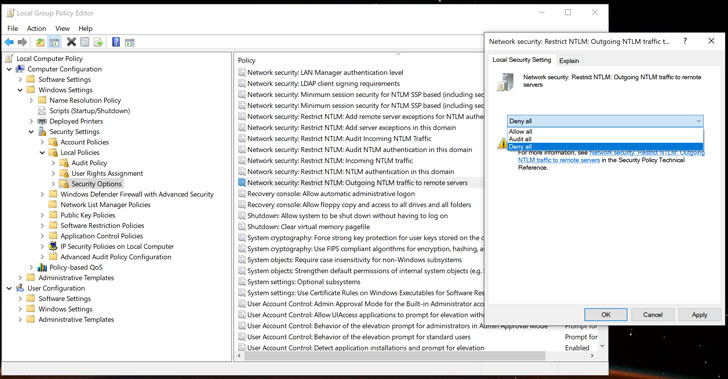 Besides using a strong password, Windows users can also change the security policy settings to restrict the operating system from automatically passing their NTML credentials to a remote SMB server.

This is not the only issue to have been uncovered in Zoom video conferencing software over the past couple of days, raising privacy and security concerns among millions of users.

The FBI is warning zoom users of the “Zoom-Bombing” attack after some people find a way to sneak their way into unsuspecting meetings and online gatherings and bombarded them with pornographic images or racist comments.

Just yesterday, another report confirmed that Zoom doesn’t use end-to-end encryption to protect calling data of its users from prying eyes despite telling users that “Zoom is using an end to end encrypted connection.”

Earlier this year, Zoom also patched another privacy bug in its software that could have let uninvited people join private meetings and remotely eavesdrop on private audio, video, and documents shared throughout the session.