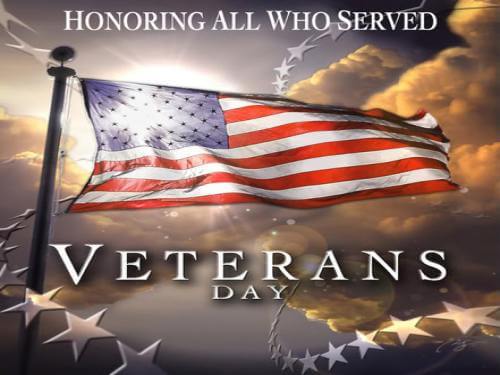 Veterans Day is a public holiday that is dedicated to honoring anyone who has served in the United States military. The holiday began as a day to remember the end of World War I and was declared a holiday by President Woodrow Wilson in 1919. Originally known as Armistice Day, the holiday became Veterans Day in 1954.

Most federal workers are given the day off and there is no mail service in the United States on this day. Federal workers who are required to work during the holiday are often given additional compensation as a benefit.

When Woodrow Wilson declared 11 November a holiday, the primary intention was to have a day to reflect on the sacrifices of those who had served in the military during World War I. Observation of the holiday through parades and meetings was envisioned.

Today, many Americans observe the day by attending ceremonies and parades that are dedicated to honoring the troops for their service. These often allow veterans to speak about their time in the service and give Americans the opportunity to personally thank veterans for their sacrifice.

Some retail establishments and restaurant chains offer free or discounted meals for people who can prove their veteran status.

Veterans Day always falls on 11 November, but it may be observed on a different day due to the fact that it is a federal holiday. Federal employees and school children typically have the day off work and school, so the holiday is observed on the Monday following the actual date of the holiday if it happens to fall on a weekend.

November 11 was chosen as the official date for Veterans Day in reference to the ending of World War I. Germany signed an armistice with the Allies that signaled the end of the war on at 11 a.m. on 11 November 1918.

What is the Greenlight A Vet? Well, America’s veterans are some of our nation’s bravest, hardest-working men and women. However, it’s hard to show them the appreciation they deserve when, back home and out of uniform, they’re more camouflaged than ever. Greenlight A Vet is a campaign to establish visible national support for our veterans by changing one light to green.

Just change one light to green in a visible location-on your porch, in your home, or at your office-and keep it glowing every day as a symbol of appreciation and support for our veterans.

Liqiud Video Technologies would like to Thank all Veterans – Past, Present and Future for their service to our country.  Without your bravery the United States of America would be the land of Free.