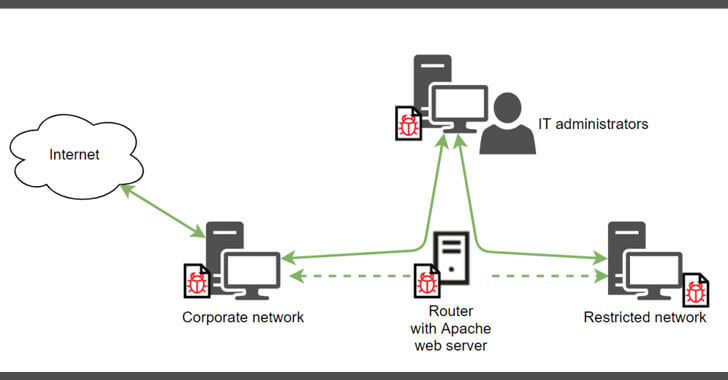 A prolific North Korean state-sponsored hacking group has been tied to a new ongoing espionage campaign aimed at exfiltrating sensitive information from organizations in the defense industry through ThreatNeedle malware.
Attributing the attacks with high confidence to the Lazarus Group, the new findings from Kaspersky signal an expansion of the APT actor’s tactics by going beyond the usual gamut of financially-motivated crimes to fund the cash-strapped regime.
This broadening of its strategic interests happened in early 2020 by leveraging a tool called ThreatNeedle, researchers Vyacheslav Kopeytsev and Seongsu Park said in a Thursday write-up.
At a high level, the campaign takes advantage of a multi-step approach that begins with a carefully crafted spear-phishing attack leading eventually to the attackers gaining remote control over the devices.

ThreatNeedle is delivered to targets via COVID-themed emails with malicious Microsoft Word attachments as initial infection vectors that, when opened, run a macro containing malicious code designed to download and execute additional payloads on the infected system.
The next-stage malware functions by embedding its malicious capabilities inside a Windows backdoor that offers features for initial reconnaissance and deploying malware for lateral movement and data exfiltration.
“Once installed, ThreatNeedle is able to obtain full control of the victim’s device, meaning it can do everything from manipulating files to executing received commands,” Kaspersky security researchers said.
Kaspersky found overlaps between ThreatNeedle and another malware family called Manuscript that has been used by Lazarus Group in previous hacking campaigns against the cryptocurrency and mobile games industries, besides uncovering connections with other Lazarus clusters such as AppleJeus, DeathNote, and Book code.

Interestingly, Manuscrypt was also deployed in a Lazarus Group operation last month, which involved targeting the cybersecurity community with opportunities to collaborate on vulnerability research, only to infect victims with malware that could cause the theft of exploits developed by the researchers for possibly undisclosed vulnerabilities, thereby using them to stage further attacks on vulnerable targets of their choice.
Perhaps the most concerning of the development is a technique adopted by the attackers to bypass network segmentation protections in an unnamed enterprise network by “gaining access to an internal router machine and configuring it as a proxy server, allowing them to exfiltrate stolen data from the intranet network to their remote server.”

The cybersecurity firm said organizations in more than a dozen countries have been affected to date.
At least one of the spear-phishing emails referenced in the report is written in Russian, while another message came with a malicious file attachment named “Boeing_AERO_GS.docx,” possibly implying a U.S. target.
Earlier this month, three North Korean hackers associated with the military intelligence division of North Korea were indicted by the U.S. Justice Department for allegedly taking part in a criminal conspiracy that attempted to extort $1.3 billion in cryptocurrency and cash from banks and other organizations around the world.
“In recent years, the Lazarus group has focused on attacking financial institutions around the world,” the researchers concluded. “However, beginning in early 2020, they focused on aggressively attacking the defense industry.”
“While Lazarus has also previously utilized the ThreatNeedle malware used in this attack when targeting cryptocurrency businesses, it is currently being actively used in cyberespionage attacks.”