The Best Home Security Cameras of 2017 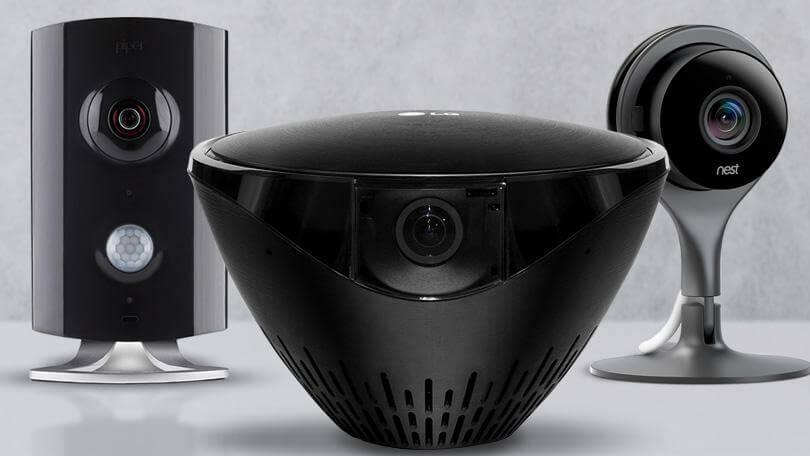 One of the biggest benefits of a smart home is being able to know what’s going on when you’re not actually there. Whether you’re checking in on your kids, pets, or an exotic jewel collection, a home security camera is a great tool for keeping an eye on things from afar.

Although capabilities vary from device to device, surveillance cameras allow you to monitor what’s going on in your home through live or recorded video. But not all cameras are created equally. Some have alarms or can send you notifications when they detect activity, some offer two-way audio, some are meant to monitor your baby, and some even double as full-on home automation hubs.

We’ve tested lots of home surveillance cameras over the last few years, so we know what’s important to look for. For instance, you want a camera that’s simple to set up and use. Additionally, one of the very first qualities we notice is an attractive—though discreet—design. It’s important that the camera looks like something you actually want in your home, but depending on your needs, you may not want it to stand out too much.

Device support is critical as well. Our favorite cameras allow you to check in from anywhere, whether it’s an app on your phone or a Web browser. Additional features vary from camera to camera, and each of our top picks offer just enough variety to set them apart from the rest of the competition.

Here are some other important factors to consider when buying a home security cam:

Even though 1080p is generally the standard resolution for cameras we’ve tested, and you won’t find any that stream or record in 4K any time soon, there are benefits to cameras with higher resolution sensors. Few home security cameras have optical zoom lenses, but almost all have digital zoom, which crop and enlarge whatever the camera is recording. The more megapixels a camera sensor has, the more you can digitally zoom in and still be able to see things clearly.

Besides resolution, consider the field of view as well. All security cameras have wide-angle lenses, but not all angles are created equal. Depending on the lens’ field of view, it can see between 100 and 180 degrees. That’s a big range in terms of the camera’s vision cone. If you want to watch a large area, you should consider a camera with a very wide field of view.

If you want to keep an eye on the rooms of your home, there are plenty of options. If you want to keep an eye on your driveway, backyard, or front porch, you need to be more choosy. Not all home security cameras are rugged enough to be mounted outdoors. You need a camera that’s waterproof and can stand up to rain, snow, and sun, and survive the extreme temperatures of summer and winter. The Nest Cam Outdoor and Netgear Arlo are two models built specifically for use outdoors, while the Nest Cam Indoor and the Netgear Arlo-Q might not survive the next rainstorm if you mount them over your garage door.

Most security cameras use Wi-Fi, but not all rely on it exclusively. Some add Bluetooth for local control and easier setup through your smartphone, while others incorporate separate home automation networking standards to interact with other devices, like ZigBee or Z-Wave. For most cameras, all you need to do is follow instructions on an app to connect them to your home network.

Once your camera is connected, you’ll almost certainly be able to access it through your smartphone or tablet. The vast majority of home security cameras today have mobile apps, and many focus entirely around those apps for doing everything. Some have Web portals as well, which add flexibility for accessing your videos and alerts from anywhere.

The videos your camera records probably won’t be stored on the camera itself. Most home security cameras use cloud services to store and offer remote access to footage. Some models have microSD card slots so you can physically pull the video from them when you want to review footage, but this is a rare feature.

Keep in mind that not all cloud services are alike, even for the same camera. Depending on the manufacturer, your home security camera will store different amounts of footage for different lengths of time. This service is often a paid subscription on top of the price of the camera itself, though some cameras offer free cloud storage to varying degrees. Cloud storage service is usually offered in tiers, letting you choose between keeping footage for a week, a month, or more.

As you can see from our picks, most of the top-rated home security cameras on the market are roughly in the $200 range, but some of them also require an additional fee to store recorded video in the cloud. We break down any extra fees in our reviews, so it’s worth taking a look at each to find out which one fits your budget. Then again, you can’t really put a price on peace of mind.

Featured in This Roundup