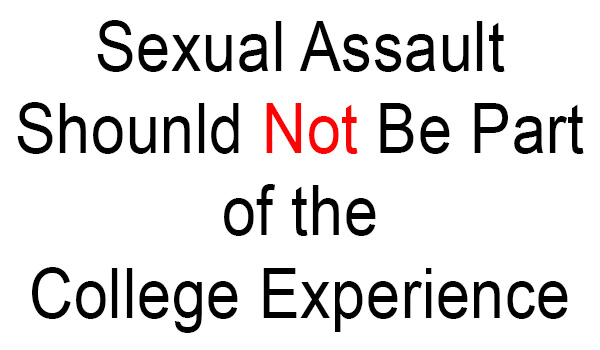 A survey by the Association of American Universities (AAU) found that 23% of female college students have been sexually assaulted.

In additon, the survey found that overall rates of reporting to campus officials and law enforcement or others were low, ranging from five percent to 28 percent, depending on the specific type of behavior. The most common reason for not reporting incidents of sexual assault and sexual misconduct was that it was not considered serious enough. Other reasons included because they were “embarrassed, ashamed or that it would be too emotionally difficult,” and because they “did not think anything would be done about it.”

More than six in 10 student respondents (63.3 percent) believe that a report of sexual assault or sexual misconduct would be taken seriously by campus officials.

The AAU Campus Climate Survey on Sexual Assault and Sexual Misconduct was designed to assess the incidence, prevalence and characteristics of incidents of sexual assault and misconduct. It also assessed the overall campus climate with respect to perceptions of risk, knowledge of resources available to victims, and perceived reactions to an incident of sexual assault or misconduct.

•A relatively small percentage (e.g., 28% or less) of even the most serious incidents are reported to an organization or agency (e.g., Title IX office; law enforcement)

•More than 50 percent of the victims of even the most serious incidents (e.g., forced penetration) say they do not report the event because they do not consider it “serious enough.”

•A significant percentage of students say they did not report because they were “…embarrassed, ashamed or that it would be too emotionally difficult” or “…did not think anything would be done about it.”

•When asked what might happen when a student reports an incident of sexual assault or misconduct to a university official, about half say that it is very or extremely likely that the university will conduct a fair investigation. The percentage is lower for those groups that are most likely to report victimization (i.e., females and those identifying as TGQN). Similar percentages are evident for opinions about other types of reactions by the university (e.g., officials would take the report seriously; protect the safety of the student; take action against the offender).

•A little less than half of the students have witnessed a drunk person heading for a sexual encounter. Among those who reported being a witness, most did not try to intervene.

•About a quarter of the students generally believe they are knowledgeable about the resources available related to sexual assault and misconduct.