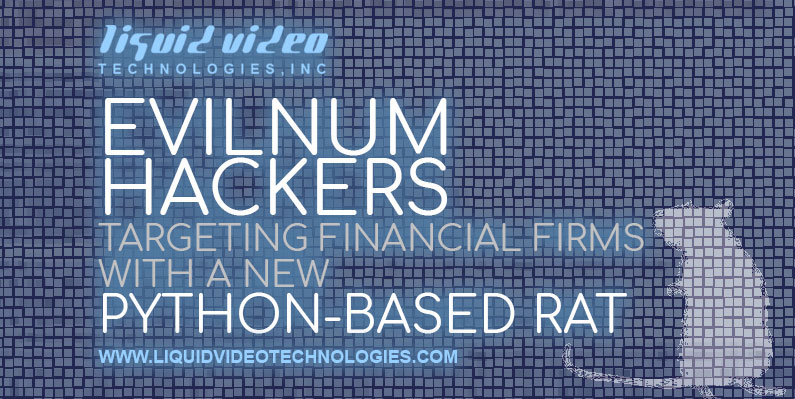 An adversary known for targeting the fintech sector at least since 2018 has switched up its tactics to include a new Python-based remote access Trojan (RAT) that can steal passwords, documents, browser cookies, email credentials, and other sensitive information.

In an analysis published by Cybereason researchers yesterday, the Evilnum group has not only tweaked its infection chain but has also deployed a Python RAT called “PyVil RAT,” which possesses abilities to gather information, take screenshots, capture keystrokes data, open an SSH shell and deploy new tools.

“Since the first reports in 2018 through today, the group’s TTPs have evolved with different tools while the group has continued to focus on fintech targets,” the cybersecurity firm said.

“These variations include a change in the chain of infection and persistence, new infrastructure that is expanding over time, and the use of a new Python-scripted Remote Access Trojan (RAT)” to spy on its infected targets.

Over the last two years, Evilnum has been linked to several malware campaigns against companies across the UK and EU involving backdoors written in JavaScript and C# as well as through tools bought from the Malware-as-a-Service provider Golden Chickens.

Back in July, the APT group was found targeting companies with spear-phishing emails that contain a link to a ZIP file hosted on Google Drive to steal software licenses, customer credit card information, and investments and trading documents.

While the modus operandi of gaining an initial foothold in the compromised system remains the same, the infection procedure has witnessed a major shift.

Besides using spear-phishing emails with fake know your customer (KYC) documents to trick employees of the finance industry into triggering the malware, the attacks have moved away from using JavaScript-based Trojans with backdoor capabilities to a bare-bones JavaScript dropper that delivers malicious payloads hidden in modified versions of legitimate executables in an attempt to escape detection.

“This JavaScript is the first stage in this new infection chain, culminating with the delivery of the payload, a Python written RAT compiled with py2exe that Nocturnus researchers dubbed PyVil RAT,” the researchers said.

The multi-process delivery procedure (“ddpp.exe”), upon execution, unpacks shellcode to establish communication with an attacker-controlled server and receive a second encrypted executable (“fplayer.exe”) that functions as the next stage downloader to fetch the Python RAT.

“In previous campaigns of the group, Evilnum’s tools avoided using domains in communications with the C2, only using IP addresses,” the researchers noted. “While the C2 IP address changes every few weeks, the list of domains associated with this IP address keeps growing.”

While Evilnum’s exact origins still remain unclear, it’s evident that their constant improvisation of TTPs has helped them stay under the radar.

As the APT’s techniques continue to evolve, it’s essential that businesses remain vigilant and employees monitor their emails for phishing attempts and exercise caution when it comes to opening emails and attachments from unknown senders.