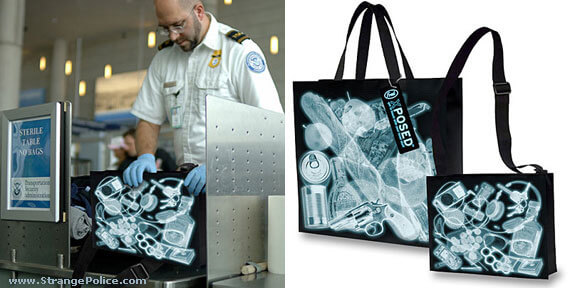 While you are stepping through the metal detector at airport security check stations, your carry-on items are going through the X-ray system. A conveyor belt carries each item past an X-ray machine. X-rays are like light in that they are electromagnetic waves, but they are more energetic, so they can penetrate many materials. The machine used in airports usually is based on a dual-energy X-ray system. This system has a single X-ray source sending out X-rays, typically in the range of 140 to 160 kilovolt peak (KVP). KVP refers to the amount of penetration an X-ray makes. The higher the KVP, the further the X-ray penetrates.

In a dual-energy X-ray system, the X-rays pass through a detector, a filter and then another detector.

After the X-rays pass through the item, they are picked up by a detector. This detector then passes the X-rays on to a filter, which blocks out the lower-energy X-rays. The remaining high-energy X-rays hit a second detector. A computer circuit compares the pick-ups of the two detectors to better represent low-energy objects, such as most organic materials.

Since different materials absorb X-rays at different levels, the image on the monitor lets the machine operator see distinct items inside your bag. Items are typically colored on the display monitor, based on the range of energy that passes through the object, to represent one of three main categories:

While the colors used to signify “inorganic” and “metal” may vary between manufacturers, all X-ray systems use shades of orange to represent “organic.” This is because most explosives are organic. Machine operators are trained to look for suspicious items — and not just obviously suspicious items like guns or knives, but also anything that could be a component of an improvised explosive device (IED). Since there is no such thing as a commercially available bomb, IEDs are the way most terrorists and hijackers gain control. An IED can be made in an astounding variety of ways, from basic pipe bombs to sophisticated, electronically-controlled component bombs.

An X-ray of a bag Notice that all organic items are a shade of orange.

A common misconception is that the X-ray machine in airport security check points, used to clear carry-on items will damage film and electronic media. In actuality, all modern carry-on X-ray systems are considered film-safe. This means that the amount of X-ray radiation is not high enough to damage photographic film. Since electronic media can withstand much more radiation than film can, it is also safe from damage. However, the CT scanner and many of the high-energy X-ray systems used to examine checked baggage can damage film (electronic media is still safe), so you should always carry film with you on the plane.

Electronic items, such as laptop computers, have so many different items packed into a relatively small area that it can be difficult to determine if a bomb is hidden within the device. That’s why you may be asked to turn your laptop or PDA on. But even this is not sufficient evidence since a skilled criminal could hide a bomb within a working electronic device. For that reason, many airports also have a chemical sniffer. This is essentially an automated chemistry lab in a box. At random intervals, or if there is reason to suspect the electronic device that someone is carrying, the security attendant quickly swipes a cloth over the device and places the cloth on the sniffer. The sniffer analyzes the cloth for any trace residue of the types of chemicals used to make bombs. If there is any residue, the sniffer warns the security attendant of a potential bomb. In addition to desktop sniffers like this, there are handheld versions, that can be used to “sniff” lockers and other enclosed spaces and unattended luggage. Walk-through models, such as GE’s Entry Scan 3, are also available. These sniffers can be used to detect explosives and narcotics.

Now that you have passed through security and are waiting to board your plane, let’s see what is happening with your checked baggage.

In addition to passenger baggage, most planes carry enormous amounts of cargo. All of this cargo has to be checked before it is loaded.

Most airports use one of three systems to do this:

In some airports, medium X-ray facilities are set up to scan an entire pallet of luggage at a time.

One old-fashioned method of bomb detection still works as well or better than most hi-tech systems — the use of trained dogs. These special dogs, called K-9 units, have been trained to sniff out the specific odors emitted by chemicals that are used to make bombs, as well the odors of other items such as drugs. Incredibly fast and accurate, a K-9 barks at a suspicious bag or package, alerting the human companion that this item needs to be investigated.

In addition to an X-ray system, many airports also use larger scanners. Let’s take a look at those next.

The first security check that your checked bags go through depends on the airport. In the United States, most major airports have acomputer tomography (CT) scanner. A CT scanner is a hollow tube that surrounds your bag. The X-ray mechanism revolves slowly around it, bombarding it with X-rays and recording the resulting data. The CT scanner uses all of this data to create a very detailedtomogram (slice) of the bag. The scanner is able to calculate the mass and density of individual objects in your bag based on this tomogram. If an object’s mass/density falls within the range of a dangerous material, the CT scanner warns the operator of a potential hazardous object.

CT scanners are slow compared to other types of baggage-scanning systems. Because of this, they are not used to check every bag. Instead, only bags that the computer flags as “suspicious” are checked. These flags are triggered by any anomaly that shows up in the reservation or check-in process. For example, if a person buys a one-way ticket and pays cash, this is considered atypical and could cause the computer to flag that person. When this happens, that person’s checked bags are immediately sent through the CT scanner, which is usually located somewhere near the ticketing counter.

In most other countries, particularly in Europe, all baggage is run through a scanning system. These systems are basically larger versions of the X-ray system used for carry-on items. The main differences are that they are high-speed, automated machines integrated into the normal baggage-handling system and the KVP range of the X-rays is higher.

With all of these detectors, scanners and sniffers, it’s pretty obvious that you’re not allowed take a gun or bomb on a plane. But what else is prohibited?

While most of the things that you can’t take on board an airplane are fairly obvious (guns, knives, explosives), there are some things that most people wouldn’t think about. Who would have thought that a smoke detector could be considered hazardous? If you do transport a hazardous material on a passenger plane without declaring it, you could face a fine of up to $27,500! Make sure you contact the local airport authority if you have any concerns about an item you plan to carry with you on a trip.

YOU CAN’T TAKE IT WITH YOU

There are a number of items that you cannot carry on a plane, and some of that can’t be packed in your bags, either:

Because terrorism is a constant and terrifying threat, this means that any mention of certain words, such as “bomb,” “hijack” or “gun,” can lead to your immediate removal from the plane and quite possibly your arrest, even if the word is said in an innocent manner. Everyone who works in aviation, from flight attendants to security personnel, is trained to react immediately to those words.

If fences and barriers are the first line of defense, the air marshals are the last. If everything else fails and a terrorist still gets onto a flight with a weapon, an armed air marshal can take control of a situation and restrain the attackers. Although the air marshal program has existed since the 1970s, it has never had as high of a profile as it has in the post-9/11 era.

An air marshal is a federal agent disguised to look like regular passenger. Each air marshal is authorized to carry a gun and make arrests. There are not enough air marshals to cover every flight, so their assignments are kept secret. No one knows which passenger is the air marshal, or even if an air marshal is present on the flight at all. Although their exact numbers are kept classified, airline insiders estimate that only five percent of U.S. flights have an air marshal on board. This is still a major increase – in the years before 9/11, a handful of marshals guarded just a few international flights.

In addition to policing the sky, new laws have forced the installation of locks on cockpit doors. This could prevent hijackings by terrorists who are trained to fly passenger jets by keeping them away from the plane’s controls.