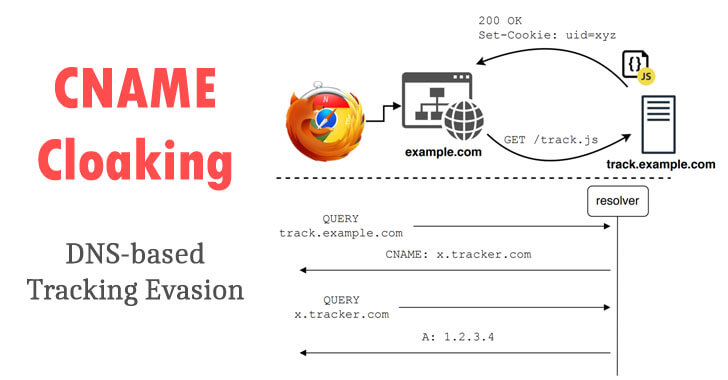 Called CNAME Cloaking, the practice of blurring the distinction between first-party and third-party cookies not only results in leaking sensitive private information without users’ knowledge and consent but also “increases [the] web security threat surface,” said a group of researchers Yana Dimova, Gunes Acar, Lukasz Olejnik, Wouter Joosen, and Tom Van Goethem in a new study.
“This tracking scheme takes advantage of a CNAME record on a subdomain such that it is same-site to the including web site,” the researchers said in the paper. “As such, defenses that block third-party cookies are rendered ineffective.”
The findings are expected to be presented in July at the 21st Privacy Enhancing Technologies Symposium (PETS 2021).

Mozilla then began blocking third-party cookies in Firefox by default as of September 2019 through a feature called Enhanced Tracking Protection (ETP), and in January 2020, Microsoft’s Chromium-based Edge browser followed suit. Subsequently, in late March 2020, Apple updated ITP with full third-party cookie blocking, among other features aimed at thwarting login fingerprinting.
Although Google early last year announced plans to phase out third-party cookies and trackers in Chrome in favor of a new framework called the “privacy sandbox,” it’s not expected to go live until some time in 2022.
In the meantime, the search giant has been actively working with ad tech companies on a proposed replacement called “Dovekey” that looks to supplant the functionality served by cross-site tracking using privacy-centered technologies to serve personalized ads on the web.

In the face of these cookie-killing barriers to enhance privacy, marketers have begun looking for alternative ways to evade the absolutist stance taken by browser makers against cross-site tracking.
Enter canonical name (CNAME) cloaking, where websites use first-party subdomains as aliases for third-party tracking domains via CNAME records in their DNS configuration in order to circumvent tracker-blockers.
CNAME records in DNS allow for mapping a domain or subdomain to another (i.e., an alias), thus making them an ideal means to smuggle tracking code under the guise of a first-party subdomain.
“This means a site owner can configure one of their subdomains, such as sub.blog.example, to resolve to thirdparty.example, before resolving to an IP address,” WebKit security engineer John Wilander explains. “This happens underneath the web layer and is called CNAME cloaking — the thirdparty.example domain is cloaked as sub.blog.example and thus has the same powers as the true first-party.”
In other words, CNAME cloaking makes tracking code look like it’s first-party when in fact, it is not, with the resource resolving through a CNAME that differs from that of the first party domain.
Not surprisingly, this tracking scheme is rapidly gaining traction, growing by 21% over the past 22 months.

The researchers, in their study, found this technique to be used on 9.98% of the top 10,000 websites, in addition to uncovering 13 providers of such tracking “services” on 10,474 websites.
What’s more, the study cites a “targeted treatment of Apple’s web browser Safari” wherein ad tech company Criteo switched specifically to CNAME cloaking to bypass privacy protections in the browser.
Given that Apple has already rolled out some lifespan-based defenses for CNAME cloaking, this finding is likely to be more reflective of devices that don’t run iOS 14 and macOS Big Sur, which support the feature.
Perhaps the most troubling of the revelations is that cookie data leaks were found on 7,377 sites (95%) out of the 7,797 sites that used CNAME tracking, all of which sent cookies containing private information such as full names, locations, email addresses, and even authentication cookies to trackers of other domains without the user’s explicit affirmation.
“It is actually ridiculous even, because why would the user consent to a third-party tracker receiving totally unrelated data, including of sensitive and private nature?,” asks Olejnik.
With many CNAME trackers included over HTTP as opposed to HTTPS, the researchers also raise the possibility that a request sending analytics data to the tracker could be intercepted by a malicious adversary in what’s a man-in-the-middle (MitM) attack.
Furthermore, the increased attack surface posed by including a tracker as same-site could expose the data of a website’s visitors to session fixation and cross-site scripting attacks, they caution.
The researchers said they worked with the tracker developers to address the aforementioned issues.

While Firefox doesn’t ban CNAME cloaking out of the box, users can download an add-on like uBlock Origin to block such sneaky first-party trackers. Incidentally, the company yesterday began rolling out Firefox 86 with Total Cookie Protection that prevents cross-site tracking by “confin[ing] all cookies from each website in a separate cookie jar.”
On the other hand, Apple’s iOS 14 and macOS Big Sur come with additional safeguards that build upon its ITP feature to shield third-party CNAME cloaking, although it doesn’t offer a means to unmask the tracker domain and block it right at the outset.
“ITP now detects third-party CNAME cloaking requests and caps the expiry of any cookies set in the HTTP response to seven days,” Wilander detailed in a write-up in November 2020.
So does Brave browser, which last week had to release emergency fixes for a bug that stemmed as a result of adding CNAME-based ad-blocking feature and in the process sent queries for .onion domains to public internet DNS resolvers rather than through Tor nodes.
Chrome (and by extension, other Chromium-based browsers) is the only glaring omission, as it neither blocks CNAME cloaking natively nor makes it easy for third-party extensions to resolve DNS queries by fetching the CNAME records before a request is sent, unlike Firefox.
“The emerging CNAME tracking technique […] evades anti-tracking measures,” Olejnik said. “It introduces serious security and privacy issues. User data is leaking, persistently and consistently, without user awareness or consent. This likely triggers GDPR and ePrivacy related clauses.”
“In a way, this is the new low,” he added.