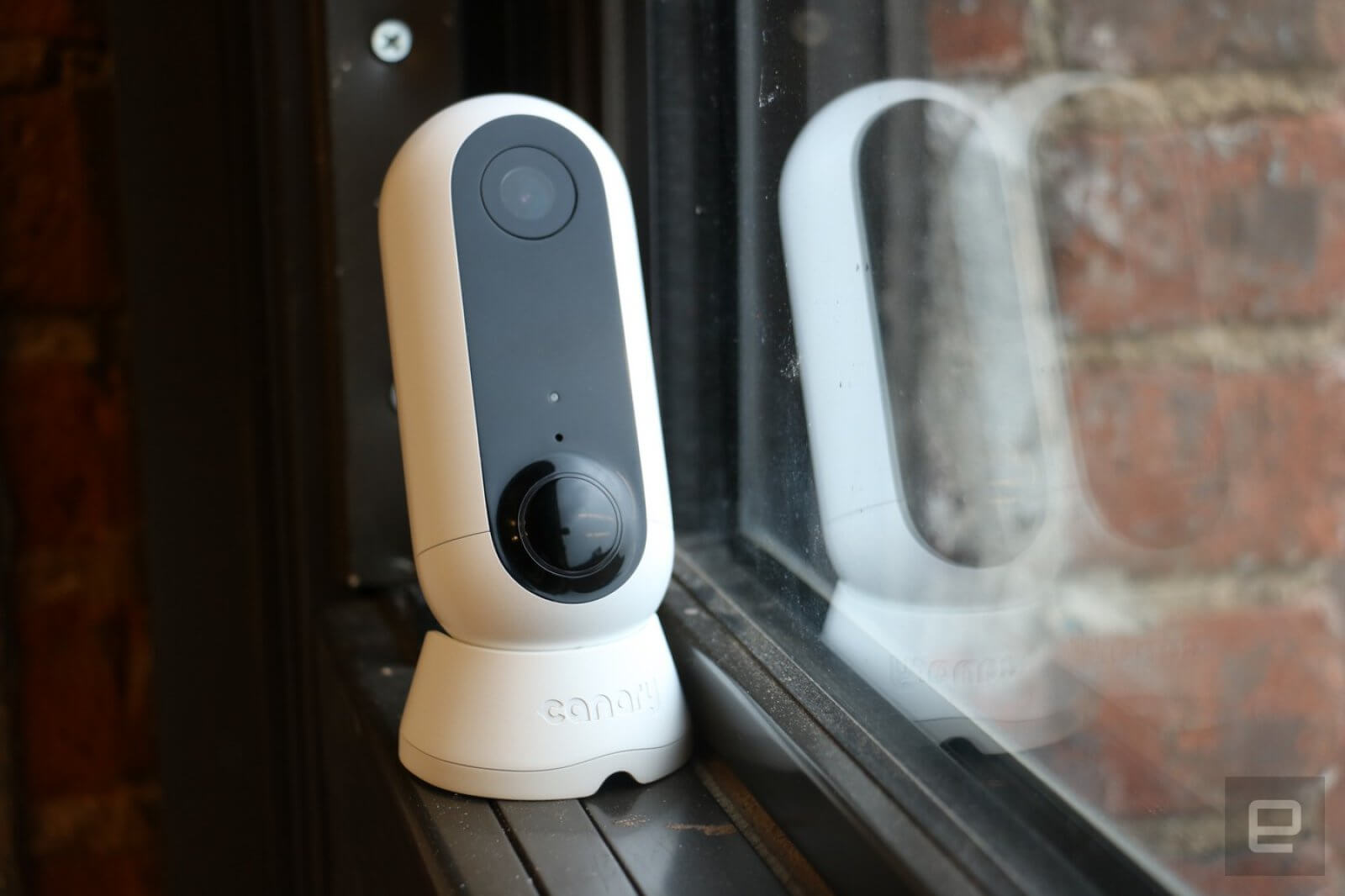 Security cameras are slowly making their way out of your house and onto your porches and yards. Canary Flex is following the footsteps of rival Nest by launching a new, smaller weatherproof camera called the Flex that can be plugged into an outlet or powered by batteries. It’s available for pre-order today for $199 and will be in stores by the holidays. Canary is also introducing a new pricing model that is pretty different from what’s on the market, but we’ll get to that in a bit.

Rated IP65, the Canary Flex can withstand splashes of water, and thanks to the included weatherproof cord, it can remain plugged in even when it’s wet. If you’d like to go wireless, you can use the bundled rechargeable battery, which should last two to three months of average use, the company said. When it’s running on batteries, the Flex runs on a low power WiFi state to stay connected to the servers without sucking up the juice and also uses a passive infrared (PIR) sensor to detect incidents before triggering the rest of the system. Otherwise, the Flex uses the camera (or “computer vision,” as Canary called it) to monitor activity when plugged in. When triggered, the Canary Flex will record HD video to the cloud.

Unlike its predecessor, the Canary Flex is compact, and fits comfortably in your hand so you can easily move it around should you need to. It also has a magnetic base that lets it swivel 360 degrees in its companion mount. However, you’ll lack the siren that the original camera had, as well as what Canary called the home health sensors. The latter relay feedback on your house’s temperature, humidity, and air quality. Those who already own the older Canary camera can use the same app with the new device, and no hub is required.

To make it easier to place the Flex around your house, Canary is also launching a series of accessories, such as a secure mount, a stake mount to stick your camera in your flower pot, and a fun twist mount to wrap your Flex around almost anything.

For those who want complete peace of mind, Canary is also launching a 4G LTE mount with Verizon that will let your Flex switch to cellular data in the event that your WiFi network drops out. The 4G mount can be plugged in, but also has enough onboard battery to last as long as the Flex’s power pack will. This would be great for those who want to prepare for power outages. It’ll be available shortly after the Flex hits store shelves.

One of the coolest things about this launch is Canary Flex ‘s new pricing model that does away with the industry’s conventional tiers system altogether. Instead of making you pay more to store more of your footage like competitors do, Canary is letting you access the last 24 hours of your timeline for free. That’s twice the 12 hours it previously let nonpaying customers have.

The company is also removing its previous limits on features such as saving and downloading clips, as well as sending them to other contacts. Those who want more support can pay $9.99 a month for one device ($15 for two to three cameras), and that membership will come with up to $1,000 in homeowners deductible reimbursement (for qualifying incidents), as well as dedicated agents who will follow you through your incident report process. Members also get extended warranties and access to footage from the prior 30 days.

That’s quite a big bump from the free version and could give Canary Flex a serious edge over its competitors. Both Nest and Canary’s devices cost $199, but the latter says it is working on a more personable approach to security that could make its outgoing alerts more meaningful. Some of these upcoming improvements include a refined object, people, and animal recognition, as well as better understanding of new versus repetitive motions. These changes will soon roll out to the Canary app as well. In the meantime, you may want to finetune your security camera settings so you’re not getting buzzed for every time your neighbor’s dog jumps, or for random tree branches smacking against your window.